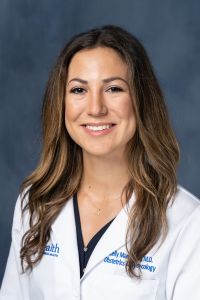 Kelly was raised in Pensacola, Florida and has lived in Florida almost her entire life.  She graduated from the University of Florida in 2016 with a Bachelor of Science degree in Biology awarded cum laude. Go Gators!  After graduation, she conducted research with the UF Department of Orthopedics while also volunteering with the Mobile Outreach Clinic in Gainesville.   She began medical school in 2017 at Florida State University College of Medicine and was elected to Alpha Omega Alpha Honor Medical Society during her fourth year.  During her time at FSU, Kelly was involved with the American Medical Women’s Association at both a local and national level as a member of the Advocacy Committee.  She also served as the Treasurer of the OBGYN Interest Group and was captain of the intramural soccer team.  She is passionate about reproductive rights and is actively working with Florida Planned Parenthood to increase access to emergency contraception for survivors of sexual assault.  In her free time she enjoys playing soccer, doing spin classes, and strength training as well as spending time with her American Bulldog, Wallace.