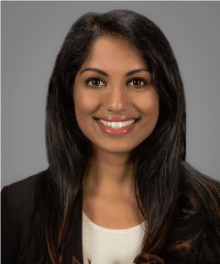 Ishana was born in New York City, New York. Ishana completed her undergraduate degree at the University of Florida where she earned a Bachelor of Arts in English with a focus on film studies. During her time at the University of Florida, Ishana worked as a Research Assistant for the Department of Biochemistry and Behavioral Medicine Research Lab. In 2015 Ishana began medical school at the University of South Florida Morsani College of Medicine. She was part of multiple memberships and honorary societies such as the American Medical Association, Delta Epsilon Iota Academic Honor Society, Florida Medical Association and many more. During her time at the University of South Florida, Ishana Volunteered as a big sister for Big Brothers and Big Sisters of Tampa Bay. She volunteered as a mentor for a “Little Sister” in the community where they would attend community events together, strengthening community roots. Ishana’s partner, Gabriel Jerkins had a successful match with the University of Florida’s Department of Psychiatry and will be joining her in the summer of 2019. Ishana enjoys video games, trying new foods, traveling, board games and long distance/endurance running.