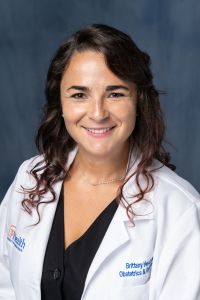 Growing up in a military family, Brittany moved around a lot throughout her childhood, mostly between Southern California and Northern Virginia. Her parents now reside in Puerto Rico, where her mom is from. Brittany graduated from the University of Virginia in 2016 with a Bachelor of Science in Biology and a minor in Bioethics. She then continued at the University of Virginia for medical school. Brittany is passionate about serving vulnerable populations, both locally and internationally: she was involved in the Charlottesville free clinic and community health fairs and she completed several global health experiences including conducting a public health campaign for cardiovascular disease reduction and working in a rural clinic. She was also president of the Latinx Medical Student Association and a member of the UVA SOM Admissions Committee. In recognition of her service efforts, she was inducted into the Gold Humanism Honor Society. When not in the hospital, Brittany loves painting and baking (a self-proclaimed Star Baker, for those of you who know Great British Bake Off), watching UVA basketball (#gohoos), and exploring new restaurants and wineries. She also enjoys traveling and scuba diving.