The gynecology rotation for the PGY 1 resident is divided into two 6-week blocks. The surgical techniques of dilation and curettage, sterilization, cervical conization, cystoscopy, hysteroscopy, laparoscopy, and laparotomy are introduced. The resident also learns how to perform a colposcopic examination and place an IUD. In addition, the resident will gain extensive experience in the management of outpatients with gynecologic disorders.

Second-year residents spend 6 weeks on a Gynecologic Surgical Subspecialties rotation. During the rotation, they work closely with our minimally invasive surgeon and urogynecologist; they will gain more experience in endoscopy, and will also be introduced to vaginal and urogynecologic procedures.

Third-year residents have a 12-week rotation in gynecology, and will spend an additional 6 weeks on a Gynecologic Surgical Subspecialties rotation.  Residents will improve their operative laparoscopy and open surgery skills, and further develop their understanding of the principles of vaginal surgery. They will also learn to perform LEEP and office hysteroscopic procedures. While on the Gynecologic Surgical Subspecialties rotation, the principles of urogynecology and minimally invasive surgery are expanded upon. In addition, the resident operates one day of the week at the V.A. Medical Center performing laparoscopic, vaginal, and abdominal procedures under the supervision of the V.A. gynecologists. The resident also spends one-half day at the V.A. outpatient clinic providing female veterans with gynecologic care. 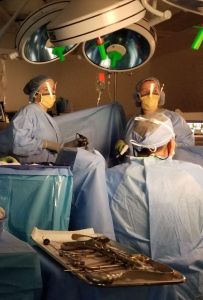