Dr. Sylvester-Armstrong was born and raised in Ft. Lauderdale, Florida. She completed her undergraduate studies at the University of Florida where she majored in Food Science and Human Nutrition with a concentration in Nutritional Sciences. She attended medical school and completed her Obstetrics and Gynecology residency at the University of Florida College of Medicine.

Dr. Sylvester-Armstrong’s research interests include gene polymorphisms as it related to personalized medicine in the obstetric population. She is also interested in placental derived exosome regulation of islet function during pregnancy. Dr. Sylvester-Armstrong also enjoys medical education and is the recipient of several teaching awards throughout her career.

When not at work, Dr. Sylvester-Armstrong enjoys spending time with her husband, high intensity interval training at Orange Theory Fitness and traveling. 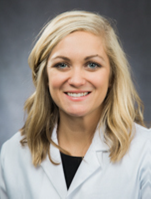 Dr. Reeder is a native of Tennessee.  She completed her undergraduate and medical studies at East Tennessee State University.  As a medical student, she was selected for membership in the Gold Humanism Honor Society.  Upon graduation from medical school, she began residency training at the University of Tennessee-Knoxville, where she has excelled as a clinician, clinical investigator, and leader.  She has published two articles, one as first author, and one textbook chapter.  She also has made two poster presentations at scientific meetings, each of which addressed an extremely important topic in modern obstetrics. One of these investigations was entitled, “Rate of Histologic Chorioamnionitis Among Parturients with Intrapartum Fever.”  The second was entitled, Improving Recognition and Response to Maternal Blood Loss at Birth.”

Dr. Reeder is married and has a young son.  When not engaged in work, she enjoys spending time with her family, exercising, and listening to music.

Dr. Marcella Rodriguez is a native of South Florida. She completed her undergraduate studies at the University of Miami where she majored in Exercise Physiology. She then attended medical school at Nova Southeastern University. She completed her OBGYN residency at INOVA Fairfax Hospital in Northern Virginia where she published two articles and received several teaching awards.

When not at work, Dr. Rodriguez enjoys spending time with her husband and dog, being active and considers herself a foodie